THE AIM OF CATCH WRESTLING 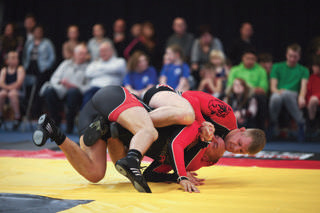 The aim of Catch Wrestling is to gain control over your opponent in order to:

Put your opponent on their back – to pin them. This is with any part of both shoulders or both shoulder blades of your opponent in contact with the mat at the same time. When the opponent is pinned, a win will instantly be given by the referee. Please note that it is irrelevant if you were going for a submission at the time, the rule is to remain OFF your back at all times.

To force your opponent to submit. A submission is when force is used through a legitimate technique in a controlled way, causing pain for that opponent that he wishes to concede. It is for the wrestler to tap or to shout ‘tap’ and the match will immediately be terminated.

On signal from the referee to confirm the pin or submission, the wrestlers must immediately release the hold. Failure to do so may result in disciplinary action.

Any serious breach of rules will result in instant disqualification.

Full nelson (a3/4 nelson is acceptable, but not if the leg is blocked or there is restriction in achieving the pin)

Fingers must not be bent back at anytime

There must be no talking to your opponent during a match

Any breach will result in either a warning or disqualification.

Wrestlers will be asked to wear a band to identify their corner colour.

Wrestlers must be warmed up and ready for their match. Once their name has been called, they will have a 1 minute window to come to the mat. It is their responsibility to be ready and failing to do so will lead to immediate disqualification.

Information regarding when you are wrestling will be available from the pairing table.

Historically, there were no set guidelines regarding time scales. Matches would go on until one of the wrestlers won with a pin or a submission. We have had to put time restrictions on the matches for the event to ensure that it runs smoothly.

This will be confirmed once all entries are received and the evening schedule planned.

No break or rest period.

Once the match commences, there will be no break or rest periods (except in the case of injury time or where the referee may call time to address an issue).

No ingestion of fluid or food during the match.

The referee or medical representative has the right to call injury time as and when they feel appropriate.

Dependent on the injury, this can lead to a decision to terminate the bout. For example, in the case of excessive bleeding that cannot be stopped within a reasonable timescale, the match can be terminated by the referee.

The matches will take place on safe, approved mats.

If during the match, either wrestler leaves the wrestling area in a position of disadvantage, the referee will stop the match and bring both wrestlers to the centre of the mat. The match will be restarted with the losing wrestler in either a kneeling position or a at stomach position or in the position that the wrestler was in when the match was stopped. The bout will then be restarted from the central point of the mat in those positions.

If neither wrestler was in a clear dominant position when the bout was stopped, both wrestlers are brought to the centre of the mat and restarted in the standing position.

IN THE EVENT OF NO PIN OR SUBMISSION

In the event of no pin or submission, the referee will decide the winner based on who has been a more dominant wrestler throughout the match.